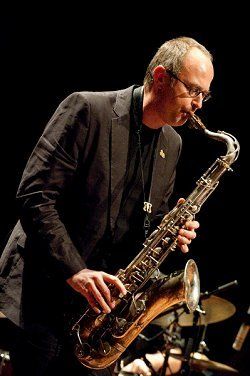 Bart Defoort was born in Bruges,Belgium on February 10, 1964. He grew up in a musical family,his father being a classical Music teacher, Choir leader and his oldest brother Kris, who became a jazz pianist and composer of contemporary Classical and Jazz Music.

Bart studied and graduated at the Royal Conservatories of Ghent and Brussels with Steve Houben and attended Summer Workshops with John Ruocco and Joe Lovano. In the beginning of the nineties,he moved to Brussels and became very active on the Belgian scene from then on.

As a Bandleader,Bart has recorded 5 CD's with mostly original compositions in Quartet or Quintet settings.He has been playing with his groups on the Major Belgian festivals (Jazz Middelheim,Jazz à Liège,etc) and podia,as well as in some other European countries like Holland,Germany & France.

In 1992 ,the Brussels Jazz Orchestra  (www.brusselsjazzorchestra.com) was founded and Bart has been a member of it  since the beginning. With the B.J.O.,Bart has recorded 17 CD.'s . They have been playing in most of the European Countries ,and also several times in New-York,Boston,as well as in South-Africa,Singapore,etc...The BJO has played and recorded with Toots Thielemans,Maria Schneider, Mc Coy Tyner, Phil Woods, Lee Konitz,Tom Harrell, Dave Liebman,  Ryan Trusdell, Joe Lovano, Darcy James Argue, Bob Mintzer, Philip Catherine, Bert Joris , Richard Galliano, David Linx, Enrico Pieranunzi, etc...

Bart is teaching at the Royal  Conservatory ( School Of Arts ) in Ghent, Belgium.