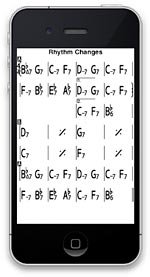 Real Book and The Smart Phone

It has become a familiar sight. At jam sessions - forgivable - perhaps. On gigs - not so acceptable - just my opinion. What am I referring to ? The array of one or more Smart Phones being used to display the Real Book. Propped up on the music stand of the piano. The bass player his eyes glued to the screen. A horn player squinting at a distance.

Why not you might say. Why not indeed. Calculators have removed the necessity to learn basic arithmetic. Chords on a Smart Phones are removing the motivation to actually learn a specific chord sequence.

One of the problems for younger musicians in particular is the decline of the commercial gig: Weddings. Birthday Parties. Events. and the like. The disco is now king - or queen - at such events. Unless the organiser is into live music the disco is a crowd pleasing and easy option.

The downside of this - apart from the possibility of earning some money - is the lack of need to acquire a basic repertoire of Standards. I can well remember experienced piano players who would in days gone by pick up the intended melody just from hearing single note. Not so common now when a suggested standard - other than a very basic list - immediately initiates a frantic thumbing of a printed Real Book - or now much more often - consulting the index of the Smart Phone version.

There are of course many honorable exceptions - musicians who through effort and experience have and extensive repertoire in their heads. More power to them.

Nevertheless I think it will be some time off before we see someone performing a Mozart Piano Concerto with his Smart Phone propped up on the Steinway.

Subscibe to Newsletter and Updates