Porec is a town located on the west coast of Istria. Due to its extraordinary geographical position, its natural attractions and cultural monuments, Porec is today one of the most important touristic sites in Croatia. The town which was designed in its current form by Romans two thousand years ago still preserves the traces of its rich past in its Old Town, and displays numerous cultural monuments, including the early christian Euphrasius's Basilica from the sixth century, which is on the UNESCO World Heritage List.

The Valamar Jazz Festival site was situated on the island of Sveti Nikola, opposite Porec, in the grounds of a hotel, beautiful surroundings, and a the view of the sea and the Town.

The Festival Director, Tamara Obrovac, made the opening announcements, firstly in Croation, and then in English, to a capacity audience. The press where there in force. Writers, photographers, and cameramen. 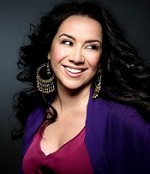 The first artist on-stage wasClaudia Acuña Claudia Acuña. Chilean singer and composer born in 1971 in Santiago. Her last album, En Este Momento, was recorded in 2009 for Marsalis Music and produced by Brandford Marsalis. It consists of ten compositions which bring Claudia's perception of the combination of the musical heritage of her native Chile and jazz tradition. The musicians with whom she recorded En Este Momento and with whom she has been performing for years will accompanied her at Porec as well. Her performance was well received and made for an interesting and eclectic set that constituted a rewarding start to the festival programme. A break. Wine, beer, and soft drinks served with singular efficiency by a couple of hard working ladies who quickly reducing the pressing crowns of thirsty festival goers to managerble proportions.

The blue skies began to transform from the blue of the day to the blue of the night as Dave Holland took the stand. Dave Holland (1946), bassist, composer and band leader, is a musician whose projects have been considered the best on the jazz scene in the last ten years. The two Grammy awards and numerous first places at the Top Ten of Down Beat magazine, both for his quintet and his big band, undoubtedly confirm that. He started his career at the age of twenty at Ronnie Scott Club in London, where Miles Davis heard him for the first time and soon invited him to join his band.

Pepe Habichuela (1944) is a member of the big Habichuela family and the person who has, together with Paco de Lucia and Enrique Morente, made flamenco popular outside Spain

Dave Holland & Pepe Habichuela virtuosos par excellence were supported three other members of the Habichuela family of musicians. Their amalgam of the traditional music of Spain and jazz brought the audience to their feet at the conclusion of this first day of the festival. 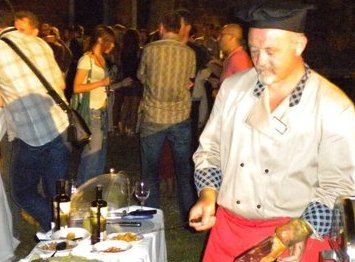 After the concert invited guests were taken to the mainland on characterful seagoing vessel and soon found themselves in the wonderful garden of the recently renovated Villa Polesini. Young Croatian jazz musicians on the bandstand, visiting musicians sitting in, a splendid buffet with ham, cheese, pasta, and drinks that included champagne, white and wine, and chilled water for the abstemious.

A wonderful end to a wonderful first day. And so to bed: 3.30am.