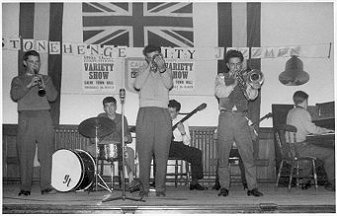 Sometimes I have a feeling that telepathy is a tangible phenomena. Ian Maud who runs the excellent website http://www.sandybrownjazz.co.uk asked if I would contribute an article about playing with the support band on a Mick Mulligan Band gig at RAF Yatesbury in nineteen fifty nine. I have been pretty busy over the past few months and thought that I really must get something down on paper. Gerry Salisbury came to mind. He was the bass player on the gig - a great muti-instrumentalist - I had met him again couple of times in on the jazz scene in early sixties London.

And what do you know ? Within a day or so of thinking about Gerry Salisbury I get an email from Gerry Salisbuy. He now lives in France and we xchanged some very interesting emails. He had contacted me via jazz-clubs-worldwide.com to mention that he too had been a close friend of the trumpet player Chris Bateson who I had written about as being an influence on my own style of playing. Then just to round off the meeting of minds via the Internet - and telepathy maybe - I get an email from my old friend Tony Pringle - the cornet player on the Mulligan gig at Yatesbury - telling me that he had a piece published on Fred Burnett's website - http://www.jazznorthwest.co.uk - reminiscing about The Stonehenge City Jazzmen.

And so: The Stonehenge City Jazz Band. Well amongst other things we won the annual talent contest - I fear much to the disapproval of the Lord Mayor - held in Calne the small town near to RAF Yatsbury. We really were quite an active outfit and had great times together and ameliorated to some extent the somewhat grim life atop the moor living in RAF Yatesbury's wooden hutted domain.

Apart from Tony Pringle the only two other musicians I saw at a later date were Pete Kedney, the pianist, who went on to study medicine at the Royal College of Surgeons in Dublin. One of the the banjo players who whose family name was Tong ( I cannot remember his first name) - he was around the Manchester scene for a while. 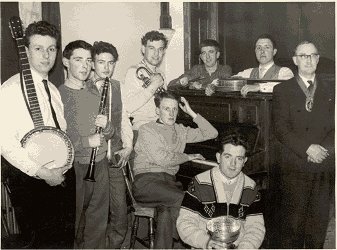 Paddy - the roadie, diver, and holder of The Cup (where did that end up I wonder) I am sure ended up in some showbiz related entrepreneurial pursuits after completing his RAF service.

As a footnote, Alan Dent - even then a very good musician - was also stationed at RAF Yatesbury. I also played the Ray River Jazmen in Swindon every Sunday evening and he would come along to sit in.

I went to have a look at RAF Yatesbury during the late seventies when my Son Adam was studying at Swidon College of Art. All that remained standing was the main gate and the memories.